One of the most important changes that DX11 has made is the brand new feature called tessellation. By introducing three more stages, graphics programmer can tessellate their triangles on the fly. There are some benefits:

In this article, I’d like to mention some detail that I learned about tessellation.

What is tessellation? This should be a question to be addressed first before everything.

Tessellation is a new feature that enables graphics programmer to tessellate their triangles on the fly so that the geometry detail will be enriched. There are three stages right after vertex shader, hull shader, tessellator and domain shader with each stage performing separate functionality.

Tessellator is a fixed function stage. It can’t be programmed directly and neither can it be setup through API interfaces, it is affected by tessellation factors, the output of hull shader (or TCS in OpenGL). It generates those tessellated triangles under the hood and feeds them with the constant data to the next stage, domain shader. One thing to be noted is that the vertices generated in tessellator are located in barycentric coordinate. It is programmer’s job to evaluate the final clip space position with the intermediate data in the barycentric coordinate.

Domain shader is the place for calculating the positions of generated vertices. Whether it is phong tessellation, PN or flat tessellation is decided here. And it is also responsible for generating vertices in clip space, like VS does without tessellation enabled. Of course it can just pass the vertices to the next stage if this is what is needed.

Here is a comparison between tessellation, POM and normal map, those captures come from the detail tessellation demo from D3D SDK. The left one is normal map, the quality quickly breaks down when viewed at a wide angle. POM solves the problem with a ray marching method, however it still shows artifacts at the silhouette of objects. SPOM can solve the problem, however it is far beyond the topic of this blog. Tessellation gives the perfect result, the rocks look really bumpy here. 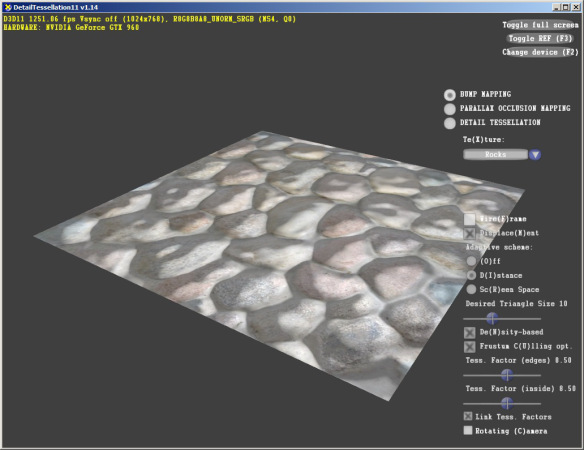 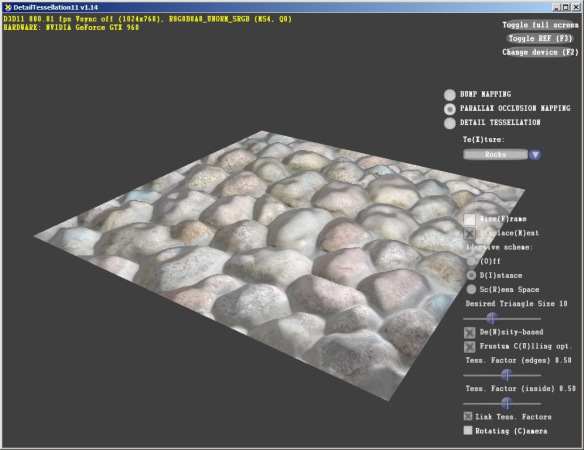 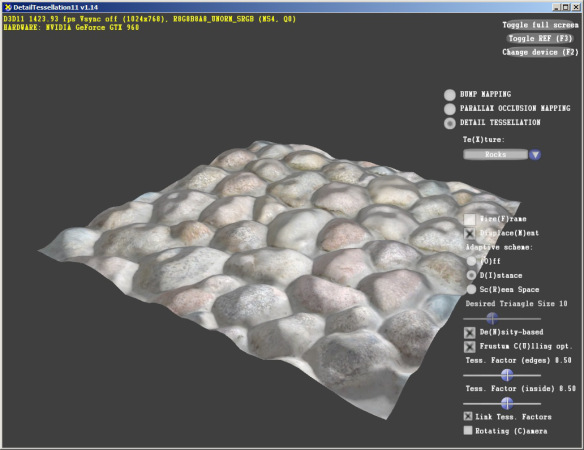 Besides, the primitive topology needs to be changed accordingly. If you use a low level of detail modal as control point set, it should be “D3D11_PRIMITIVE_TOPOLOGY_3_CONTROL_POINT_PATCHLIST”. Another typical scene is to use “D3D11_PRIMITIVE_TOPOLOGY_POINTLIST” for landscape rendering, each point will be tessellated to a quad after tessellator. Anyway, as long as the information fits your algorithm, any type of primitive topology is fine.

Let’s talk about hull shader then. A hull shader is the first of the three new stages to implement tessellation. There are two functions, constant function and hull shader.

In a real scenario, you may want to adjust your tessellation factor based on information that is already available. Dynamic LOD could be done here through calculating the tessellation factors based on distance between eye point and patch. Apart from all, one can also set up 0 as a factor, it is a valid number for tessellation factor. And tessellator will automatically drop the patch with a zero tessellation factor. Since SV_POSITION is not determined yet, it is impossible for the hardware to do clipping. However it is totally valid to do some culling in this function. If you are certain that the patch won’t be visible at all, you can set 0 as its tessellation factor to prevent it from further processing. Just be very careful when trying hull culling, because it may reject patches that could be visible after displacement.

A Hull shader is the per-control point function. Sometimes, it just passes the data through. Here is some piece of code of a hull shader:

There is not much to say about tessellator since it is non-programmable. However understanding the exact way of tessellating primitives will help even if you are not in control of every thing.

A triangle is taken as an example here. Other primitives like quad behave in a similar way. There are five steps:

The graph is taken from “An Introduction to Tessellation Shaders” in OpenGL Insights. For this very case, the outer tessellation factors are 3,3,2, and the inner one is 5.

Another detail deserves our attention is how to divide a specific edge given a tess-factor.

The above graph reveals some detail here. I am not gonna dig into it because it is not mentioned in DX SDK doc and may be different on different platforms. However one important thing to be noticed here is that we have a sudden change as tess factor goes from 2.0 to 2.5 in the first column. “Equal”, “Even” and “Odd” are actually the partitioning parameter setup in hull shader. With “equal” as partitioning method, you may have a sudden change even if you tess factor changes smoothly, that means you may have a similar sudden change in the shape of the geometry. In order to avoid it, choose the other two if possible.

Domain shader is like another vertex shader. However they are not exactly the same. Here are some differences:

The other should be similiar. If GS is disabled, either VS or DS needs to output clip space position. If you want to implement your tessellation with displacement map, here is the place to go. You can read a texture here and adjust the height of the vertex according to some value, which is usually displacement in displacement map.

As it implies by its name, flat tessellation just interpolate position values linearly, which will be totally flat. It doesn’t make much sense to use the method alone. Usually it is combined with displacement map to create a bumpy surface.

PN tessellation treats the control points as bezier control points of a curved surface. Different from flat tessellation, PN tessellation will change the shape of the silhouette even if there is no displacement map attached. Its goal is to smooth the silhouette of objects to avoid edge corners. For a further detailed explanation, please check it here. And since UE4 is open-sourced, you can also get its implementation from github.

As we can see from the above image, the silhouette will be smoother with PN tessellation.

Tessellation also has some issues if not done well. A well known one is the crack issue. A crack is born if vertices that share the same world position have different attribute which have some influence on the final position. The general rule to fix these issues is to unify all attributes that matter.

Here are some common issues:

Generally, those cracks could be eliminated by well defined 3d model. However that puts too much burden on artists. A more practical way of doing this is to fix it through some dedicated algorithm.

There are several algorithms available. Here are some by NVIDIA. Some of them tried to unify the attributes during pre-processing, like Dominate Data Algorithm. Others aims at generating unified attributes on the run, such as AEN(Average Edge Normal).

Tessellation is a brand new feature available on DX11. It offers developers a whole new way to deliver geometry detail to gamers.  It is already widely used in PC games, like Metro 2033. Both of Unreal Engine and Cry Engine have internal integration of tessellation. And it is already well supported on quite a few games in the market.